Kevin Martin broken wrist is a big blow to the Minnesota Timberwolves.

Martin has been integral to the team, averaging 20.4 points.

Apparently Martin was sick that day, requiring IV fluids for an illness that he was battling. Playing under less-than-optimal health conditions seems to have cost him dearly as he is now out indefinitely. ally a game-time decision that night after needing IV fluids while battling an illness for most of the day.

Kevin Martin broken wrist occurred with 6:48 to play in the first quarter when he was fouled while shooting a 3-pointer. He was actually able to continue play and go on to score 34 points and make six out of nine 3-point attempts. The Timberwolves were able to break a five-game losing streak.

There has been no mention of the need for surgery for Kevin Martin broken wrist. A tweet from Timberwolves PR on Twitter confirmed that an MRI was performed at Mayo Clinic Square on Martins right wrist, revealing the fracture. 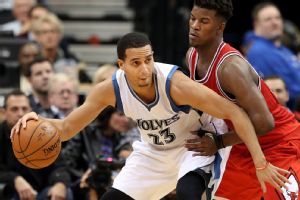 Although the nature of the injury is unclear, what is clear is that even professional athletes can suffer injuries under what seem to be innocuous circumstances, such as a fall from a standing position. Bruising of the fingers, hand, or wrist could be indicative of a severe injury such as a fracture. Professional medical attention is recommended for these types of concerns and a Hand Surgeon is well-qualified to diagnosis and treat such injuries. Dr. Arora is one such qualified individual, a practicing Hand Surgery Specialist in Michigan.

Dr. Aroras office from my first call to schedule my appointment was friendly. Walking in the first day, I felt like I was in a nice atmosphere. Dr. Arora was EXCELLENT in taking great care of my hand injury. He was gentle and very understanding to the concerns I had about my hand. His expertise was admirable and I would recommend anyone with an injury to their hand to his office to be under his care. Because of him, I have healed faster than expected and will make an 100% recovery! Thank you Dr.

I first thought I was going to have to have painful injections or surgery, but Dr. Arora suggested physical therapy may do the trick. I was doubtful, but I agreed to do it. Now, my pain is gone, and with the help of an ergonomic keyboard at work to keep my hands in the correct position, I am virtually pain free. The therapy strengthened my wrists and shoulders, and built more flexibility into my wrists.

My experience with this doctor was positive from the outset. Dr. Arora was kind and spent a great deal of time with me. Staff was friendly. The office was nice and bright.

Very friendly and helpful Great staff!!! Doctor Arora was very professional and did great work. I was very happy with everything!

If you are experiencing pain, swelling, stiffness, or other symptoms in your elbows, wrists, or hands, make an appointment to see Dr. Avery Arora today. Schedule